A Year in Crochet

When I saw all the posts last year reflecting on peoples years, I thought I would do the same this year.  However, I clearly wasn't that organised!  Whoops!!

So, having the afternoon relatively free, I thought I would sort through my pictures, and try and put something together - for the garden, my cards, or crochet?  Next year I might do one for all three - but this afternoon I had to make a choice.  The garden was quickly excluded - I seem to have run out of steam around August, and there aren't so many pretty garden photos towards the end of the year.  My New Years Resolution will be to keep my garden colour photos going throughout the year.

Next - looking at the cards, it would take more than an afternoon to make some collages to share, so that left my crochet.  I have finished most things this year, and will be taking 2 WIP in to 2014.  The blanket for the playroom - which is a huge project, although I haven't worked on it for ages.  I'm really not sure why, as it is lovely.  Maybe because I wish I had splashed out and bought merino rather than style craft?  But, I know deep down that acrylic is the better option as it can be thrown in the washing machine as and when needed, will dry quickly and won't need to be blocked.

The other WIP is a new lace gossamer scarf using the silk yarn I bought at Yarndale.  I only started this a couple of nights ago and it is coming along nicely.  The longest time was spent choosing the pattern for such expensive yarn!  I do also have a few other balls of yarn (well quite a stash if I'm honest!), some gorgeous skeins purchased at Yarndale, and some ordinary, waiting for inspiration to hit me! :)

Anyway, here is my year in crochet. 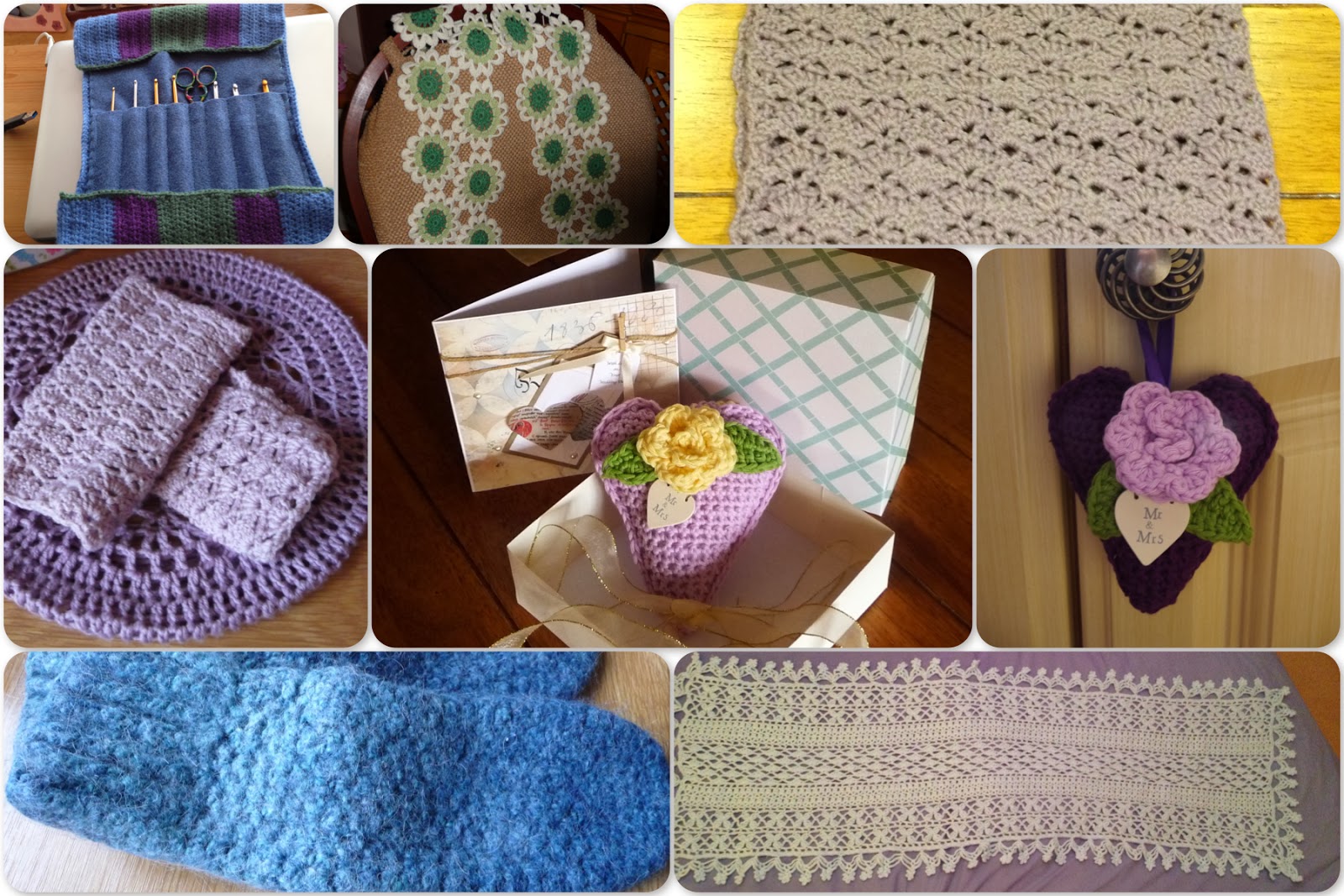 Starting the year by making gifts for friends, a hook case for me, and some alpaca socks when I had a cold. 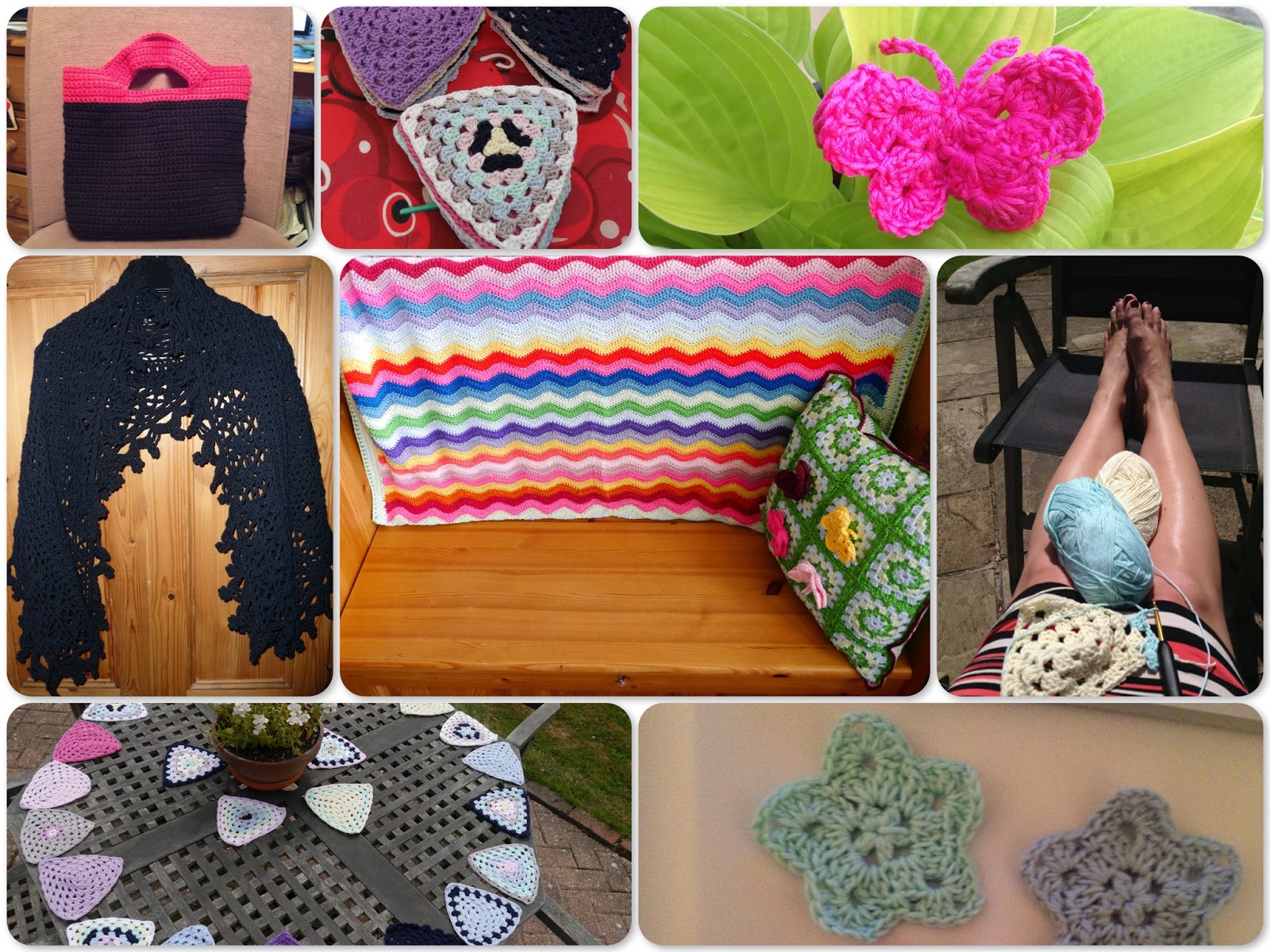 Spring time saw me make a bag and wrap to wear at my sister-in-laws wedding, a cushion to tie in with my ripple blanket in the entrance hall, and some bunting for Yarndale. 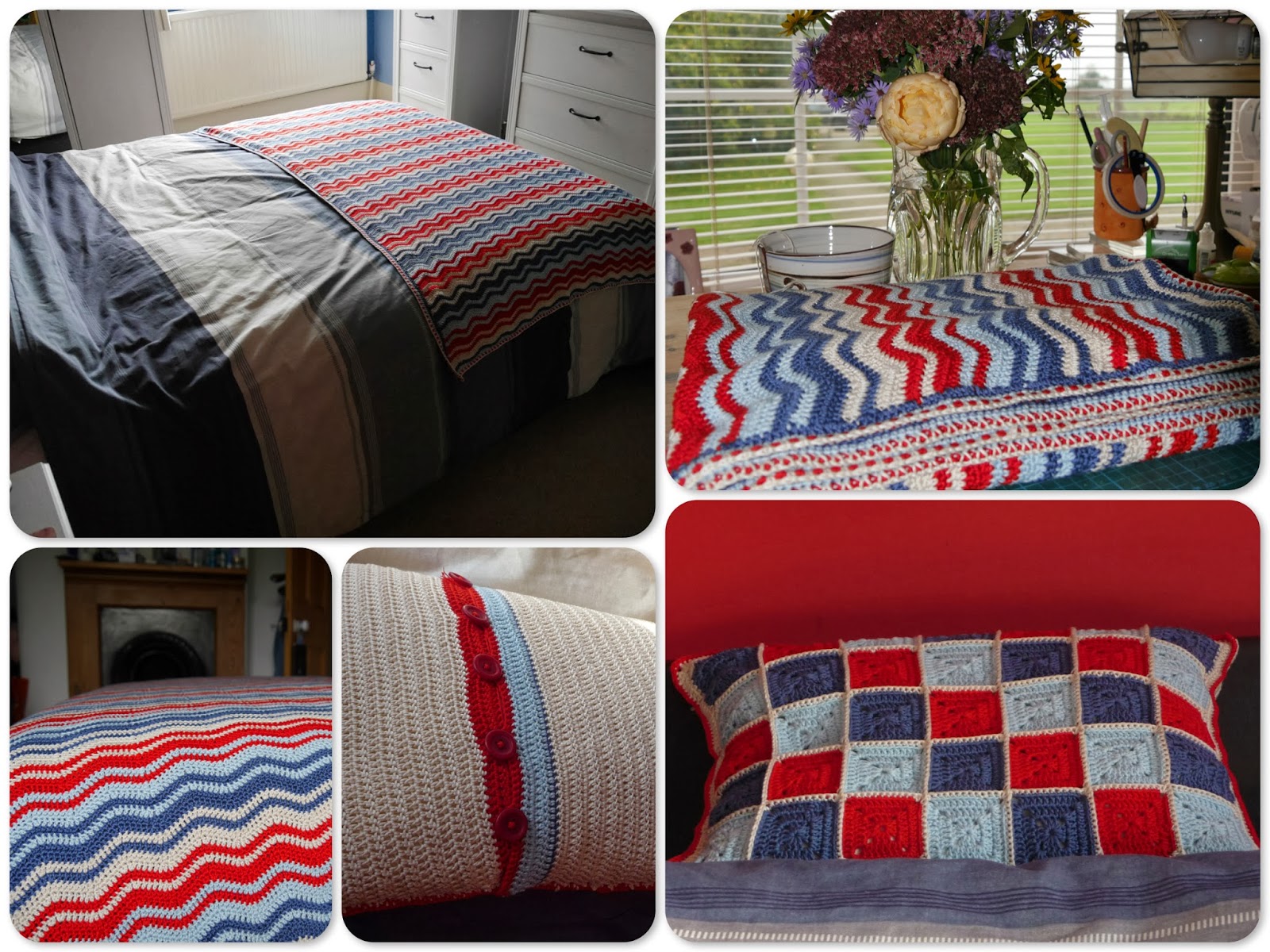 I finished Matts ripple and added a cushion to complete the look in his newly fitted room. 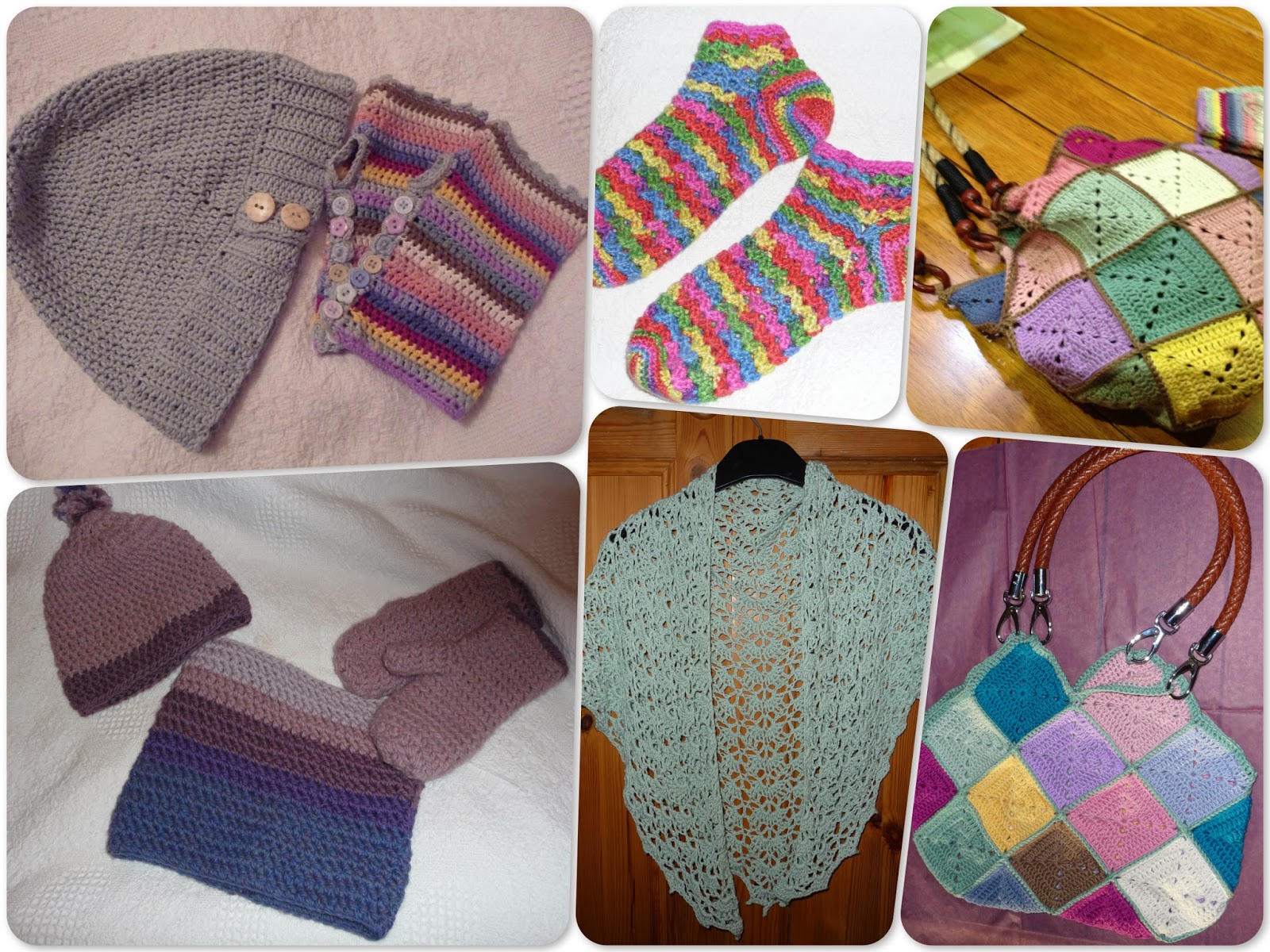 Then I moved on to making some bits for me!  A couple of hats, some mitts and a cowl and wrap, socks and a bag for me too.  A friend liked it so much, she asked me to make her one too.  I was happy to oblige. 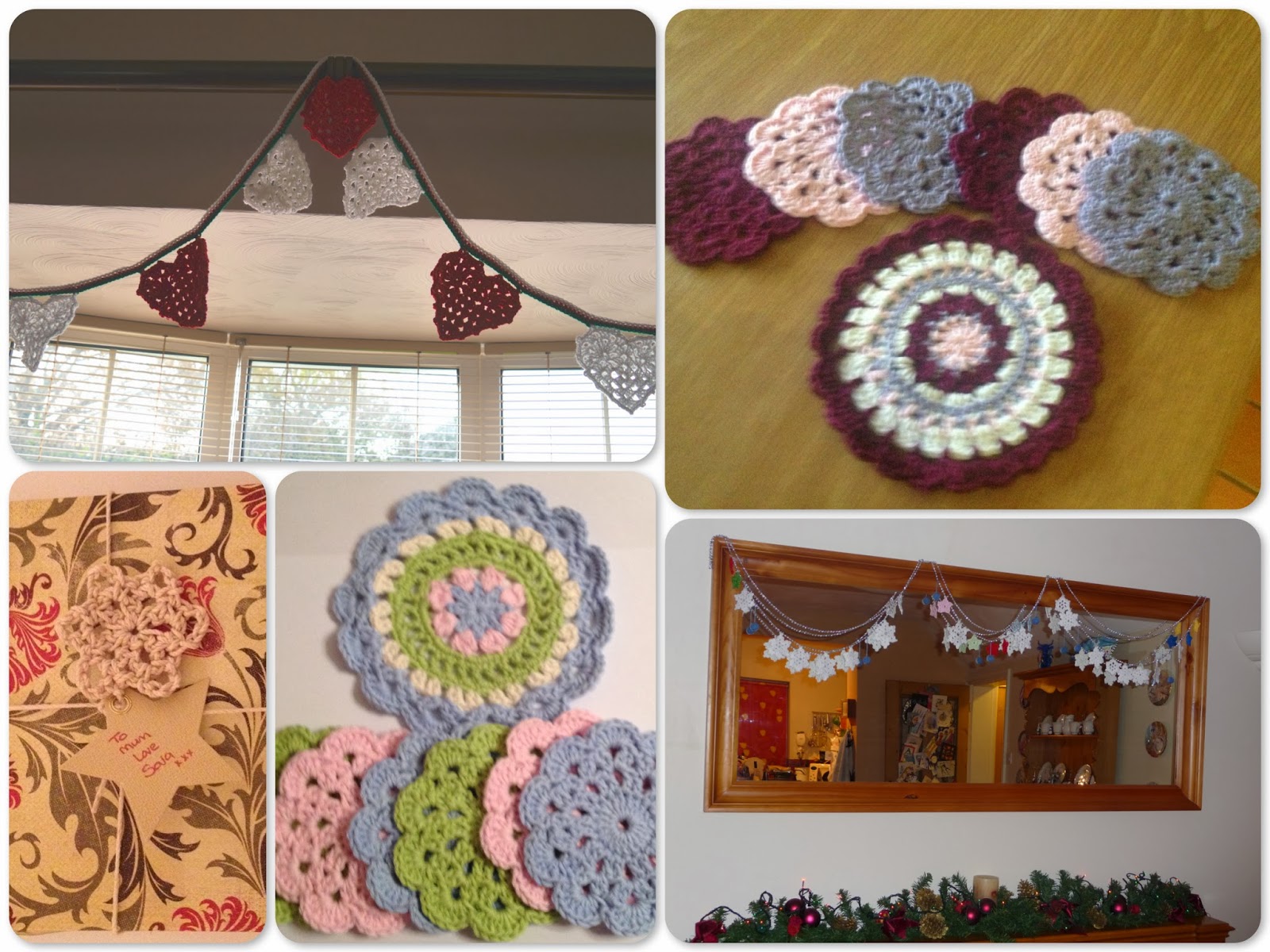 And finally Christmas crochet.  I enjoyed hanging my snowflake garland again, and I made an Advent Garland this year, and small gifts for the women of the family.

I think thats about it - quite a lot I guess, but so very enjoyable.  I'm sure 2014 will be productive too.

Well, I've just about managed to get this completed before the New Year!

Wishing you a happy and healthy 2014.

PS - I haven't had time to add links for the patterns used, there is a variety of Ravelry, Sandra at Cherry Heart, Drops, Patchwork Heart, A Creative Being,and obviously Lucy at Attic 24.  Thank you all for your inspiration. (Apologies if I've missed anyone). If you would like to know where any particular pattern came from, just let me know.  xx

SaraJ
Hi My name is Sara. I'm married and have sports mad 15 (almost 16!) year old son. I love crafts and being at home. I make cards, scrap book - and am just about to try Project Life, take photos, and garden. I have also found crochet again (thanks to Attic 24) Updated July 2013 - when I started this blog I thought I would add cards to challenges - but I realise I'm not organised in the required way and maybe don't like someone choosing how my card should look. Amazing what you find out about yourself. So this blog has turned in to more about my garden, my life in general and my growing addiction to crochet. I work, almost full time, and there are never enough hours in the day to do everything I'd like. I aspire to a clean and tidy house, with shiny floors, minimal clutter and home cooked meals every day, and time to watch my son grow up and sufficient time for me to craft,garden and crochet. It is usually a juggling act! :) x